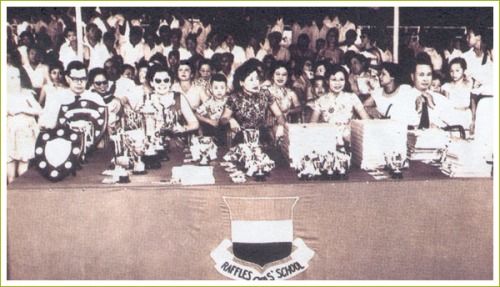 Raffles Girls’ School was established on the 4th of March 1844 with six boarders and five scholars. It first functioned as a moral development and vocational training class but later progressed to become an educational institution. The trustees of Raffles Institution sited Raffles Girls’ School at the centre of the building at Bras Basah Road. However the two schools were separated in 1847 and by 1881, the new Girls’ School started classes on its own.

In 1928, Raffles Girls’ School moved to Queen Street but vacated the premises during the Japanese Occupation. The building was then occupied by the Kempeitai as its headquarters during the war years. After liberation in 1945, the school was re-opened and temporarily housed in St Anthony’s Convent before reoccupying its own building again along Queen Street in 1946. 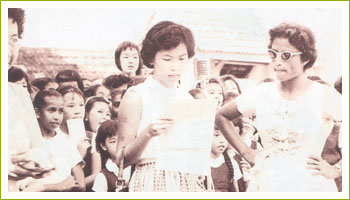 Primary classes were started in the afternoon and there were only nine classes then with Mrs Ambiviagar as Principal. By 1959, Raffles Girls’ Primary School became a full-fledged primary school in its own right when Raffles Girls’ Secondary moved to its new building in Anderson Road. As the sole occupant of the Queen Street campus, morning classes were started with Mrs V Pestana as the Principal of the school.

Miss Ida Goh was the next Principal of the school from January 1960 to November 1969. Despite its humble origins, Raffles Girls’ Primary School soon acquired a strong reputation as a premier primary girls’ school. As early as the 1960s, parents came armed with blankets, newspapers and umbrellas to ensure a place in the queue during registration. Many camped overnight as they very much wanted their daughters to be educated in the school. In the 1970s, balloting had to take place as the demand for places exceeded the number of places available.

Recognising the high demand for places, Raffles Girls’ Primary School was moved to bigger premises at Holland Grove Road. The Principal then, Mrs Lim Soo Noi, oversaw the move of the school from Queen Street to Holland Grove Road in 1979. The school continued to blaze a trail of excellence and in 1984 became one of the first two primary schools selected for the Gifted Education Programme. Mrs Lim retired in 1985 and her position was taken over by Mrs Koh Mei Ling until 1988.

The next Principal, who brought the school to greater heights, was Miss Nanda Bandara and like her predecessors, had boosted Raffles Girls’ Primary School to be the school of almost every parent’s choice. Miss Bandara was succeeded by Miss Tan Siok Cheng, in 1999.

In November 1999, fittingly for the new millennium, Raffles Girls’ Primary School moved once again, to its present campus at Hillcrest Road. It was built to accommodate more than 2700 pupils in 2 sessions and this is testimony to the continued popularity of RGPS as a school highly regarded by parents and the community.

Raffles Girls’ Primary School continues its great tradition of excellence under the leadership of Miss Tan Siok Cheng. In 2003, the school was one of the first primary schools in Singapore to receive the Singapore Quality Class Award. The school was also awarded the People Developer Standard in February 2005 and the School Distinction Award in April 2006. After an illustrious career, Miss Tan retired from service and she was succeeded by Mrs Yue Yoke Mun.

Amidst the fast-evolving education landscape, Mrs Yue dedicates her focus to building people by strengthening teacher professionalism, as well as emphasizing character-building and values amongst pupils.

At work and at play, teachers and pupils share a warm relationship and work together as a team. Indeed, as the school song aptly puts it,

“Together We Shall Strive, to Build a Better Life… Together, Together, All the Way”